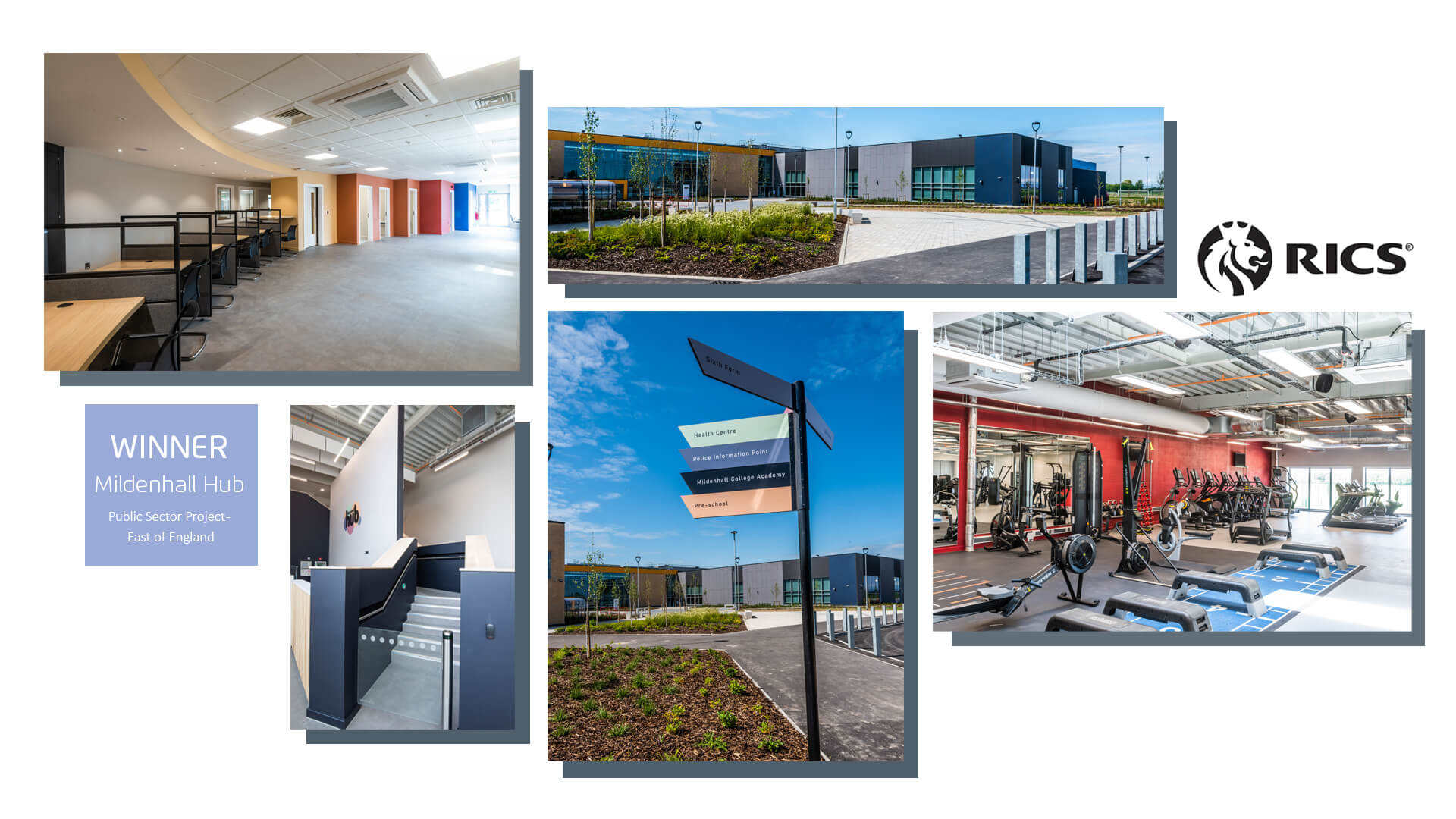 A nationally recognised ground-breaking initiative to improve the health, well-being and education for the community has won its second award in as many weeks.

Mildenhall Hub, which only opened last summer, has been named The Royal Institution of Chartered Surveyors (RICS) East of England Winner for best public sector project in its annual awards. It will now compete in the national awards final in October. And last week the Hub won best commercial building in the Royal Institute of British Architects (RIBA) Suffolk Craftmanship Awards.

On behalf of all the many hub partners, Cllr Jo Rayner, Cabinet Member for Community Hubs at West Suffolk Council, said: “The hub is about the people of Mildenhall and the surrounding area, not just now but for the future. Its success isn’t just about better school, leisure and other facilities both now and for the future; it is as much about how the people who work at the hub collaborate for the benefit of residents. Residents can come in and use a range of services in a single journey, while the hub is delivering environmental and economical savings through the old, outdated buildings it has replaced. It is a real winner for the local community and it is fantastic to see it, and the work of the design and construction professionals who worked on it, recognised with these awards.”

Charles Coulson, Associate Director, Concertus Design and Property Consultants which nominated the project for the award, said: “Mildenhall Hub is a national exemplar project and we’re delighted that it has been able to play a part in regenerating the area by supporting the growth of businesses, providing employment opportunities, and attracting people who are keen to use the remarkable facilities. We’re thrilled that the hard work of all those involved has been recognised by RICS and RIBA. We’re so proud of the team who delivered this unique project and worked so hard to make our client’s vision a reality.”

In the first year, Abbeycroft Leisure who manage the leisure facilities on West Suffolk Council’s behalf, have seen footfall and membership increase by 70 per cent on pre-covid levels. The number of students in its swim scheme has also increased by 50 per cent again compared to pre-covid levels. Abbeycroft has also been able to offer specialist classes at the hub as a direct result of working alongside the pulmonary rehab and Hub based physio teams.

And Health partners including West Suffolk NHS Foundation Trust adult and paediatric community health teams reported that linking up with Abbeycroft was helping patients recovering from a cardiac event, regain their confidence and learn how to maintain their fitness.

The Hub has also enabled families to attend community paediatric speech and language therapy rather than having to go to Bury St Edmunds, while having a library on-site has also proven important. And use of the library has also increased by 50 per cent compared to pre-covid levels.

The £40m plus hub was funded by West Suffolk Council, Education and Skills Funding Agency, Academy Transformation Trust, Suffolk County Council, the National Lottery, through Sport England, and the Suffolk Police and Crime Commissioner, and is recognised as a significant project in the Government’s national One Public Estate Programme.

It was designed by Concertus Design and Property Consultants and built by RG Carter with project management from Currie and Brown.

The Mildenhall Hub will now go through to the RICS national final in October.

You can read more about Mildenhall Hub by clicking here.